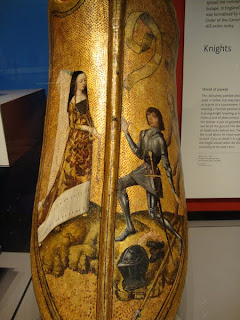 If you haven't guessed by now, I am totally addicted to the British Museum. We've been in London a week and I have already been three times and I may go again later today.

Here is a piece found the other day while wandering the museum. It is a decorative shield from Flanders and it is believed it may have been a prize a knight received for competing in a tournament. It is made from wood is dated approximately 1475-1500.

Tomorrow we head off to Prague. Yesterday we got up and said "what about a side trip?"Today do yourself a favor, instead of asking WHY ask yourself WHY NOT?
Posted by Victoria at 1:38 AM

Victoria
I am an Artist and Designer currently living in South Florida.